Wake Up, Woods is reviewed by one if Indiana’s leading children’s books authors Helen Frost for the Eugene and Marilyn Glick Indiana Author Award powered by Indiana Humanities.

On the beautiful front cover of this book, a mouse sniffs along the edge, a caterpillar munches on a leaf, and a bee gathers pollen from a flower. Another flower remains closed, but you can almost see it begin to unfold its petals and open to the sun. Everything about the image—mouse, leaves, flowers, caterpillar and bee—invite the reader to open the book and look inside, much as the woods invite us to step outside on a warm spring day.

A quick glance through the pages will reveal colorful flowers, leaves of different shapes, exploding seed pods, ants, bees, butterflies, beetles, mushrooms, small mammals, a turtle, a hummingbird—and—is that a wild turkey with a little red berry in its beak? Let’s slow down and look more carefully.

As the ants go marching through the book, if you turn the pages carefully, reading the text that informs each illustration, you will see that not all ants are the same; just when you have learned to distinguish between a field ant and a winnow ant, here is something new: a reddish carpenter ant. And something that may at first appear to be a swarm of bees spreading out across the pages, will soon be identified as many different bee species.

Twelve double-page spreads each introduce a different wildflower that is native to Indiana (a few spreads feature two similar flowers). Beautifully accurate drawings of the flowers, along with the creatures that live in close proximity to them in the woods, are matched by specific identifications and careful prose descriptions. Each spread is enhanced by a short poem about the featured wildflower.

For example, the opening spread, “Bloodroot,” shows leaves, flower buds and blossoms, plus the root of the plant, cut to show the red droplets that give the plant its name. The bloodroot flowers are home to two false blister beetles, and a mining bee, while the seed pods are being carried off by winnow ants. To a curious child (or adult) these illustrations will raise many questions—look to the text for answers.

What are those ants doing? a child might ask.

The answer: “After bloodroot goes to seed, elaiosomes (food bodies) that are attached to the seeds attract ants, which carry the seeds to their nests underground. Some ants carry them as far as forty feet away from the plant! The ants eat the food bodies, leaving the seeds underground to germinate and grow into new plants.” For some children, this may be their first introduction to ants and seeds; to more experienced young nature-lovers the book will deepen both knowledge and interest. All will be encouraged to head outdoors for a closer look.

Completing the page about bloodroot is this riddle-like poem:

Following this first entry, each page-turn brings new delights and discoveries. A white flower crab spider on a white dutchman’s breeches flower could easily remain hidden—take your time to linger on such an illustration. A few pages later, a winnow ant and a white-footed mouse approach a wood poppy from opposite directions—who will get the seeds that appear to be dropping down the page? Never mind, there are plenty for both of them. And the seed pod itself is a thing of interest and beauty.

Each spread depicts a small ecological community, showing how the lives of plants and animals are intertwined. As children read the book, either alone or with an adult, their own relationship to the natural world will be enhanced. And as they explore that world with greater knowledge and understanding, it is reasonable to hope that they will become good stewards of their inheritance.

Throughout the book, each animal species is placed in the context of a particular plant and all are identified by their common (English) names. Latin names for each pictured species can be found in an appendix. Also included are a glossary defining 26 terms that may be new to the reader, and an endnote telling where to look for the native wildflowers described in the book. While the focus is on Indiana, the note explains that “The species of this book range far and wide in much of eastern North America’s deciduous forests.”

A great deal of love, time, and other resources went into the creation of this book. Eight different organizations, most of them based in Indiana, plus “126 friends of nature and children’s literature” worked together to bring it to completion. The book will be enjoyed and appreciated by Indiana children and adults as well as by readers in many other places. This is a gift from Indiana to the world, to be appreciated now and passed on to future generations.

Helen Frost is the author of six nature-related picture books, including Step Gently Out, Among a Thousand Fireflies, and, most recently, Hello, I’m Here! (all illustrated by photographer Rick Lieder), and Monarch and Milkweed, illustrated by Leonid Gore. She has won numerous awards for her nine novels-in-poems, with two more forthcoming this year: Blue Daisy, in March, and All He Knew in August. She lives in Fort Wayne, where her back yard is a certified Monarch Waystation.

Wake Up, Woods, released in 2019, is a collaborative project of the Indiana Native Plant Society. Illustrator Gillian Harris and Poet Shane Gibson both reside in Indiana. Botanist and ecologist Michael Homoya worked for the Indiana Department of Natural Resources Natural Heritage Program for 37 years. Wake Up, Woods has been selected by the Indiana State Library to be featured at the 2020 Library of Congress Book Festival.

Monthly reviews of books written by Indiana authors are made possible by the Eugene and Marilyn Glick Indiana Authors Awards and Indiana Humanities. Opinions expressed in this review are solely those of the reviewer, not any affiliated entity.

Wake Up, Woods has been selected by the Indiana State Library to represent Indiana at the Library of Congress’s Center for the Book during the National Book Festival, which takes place annually in Washington D.C.

Adriane Doherty, publisher of Rubber Ducky Press, said, “It is such an honor for Rubber Ducky Press to have ‘Wake Up, Woods’ selected by the Indiana State Library’s Indiana Center for the Book to represent Indiana at the Library of Congress National Book Festival. We are so very proud of all the work done by the contributors and, especially, illustrator Gillian Harris and authors Michael A. Homoya and Shane Gibson. And, of course, none of this would have been possible without the drive and determination from the people of the Indiana Native Plant Society.”

“Detailed illustrations, lilting verses and scientific explanations make “Wake Up, Woods” an important text for anyone wanting to wake up to the wonder around them when visiting the woods. This is an excellent nature book to share with young readers and is perfect for the classroom, or to tuck in a backpack before a hike.”
– Wednesday Word blog of the Indiana State Library, Suzanne Walker, Indiana Young Readers Center Librarian 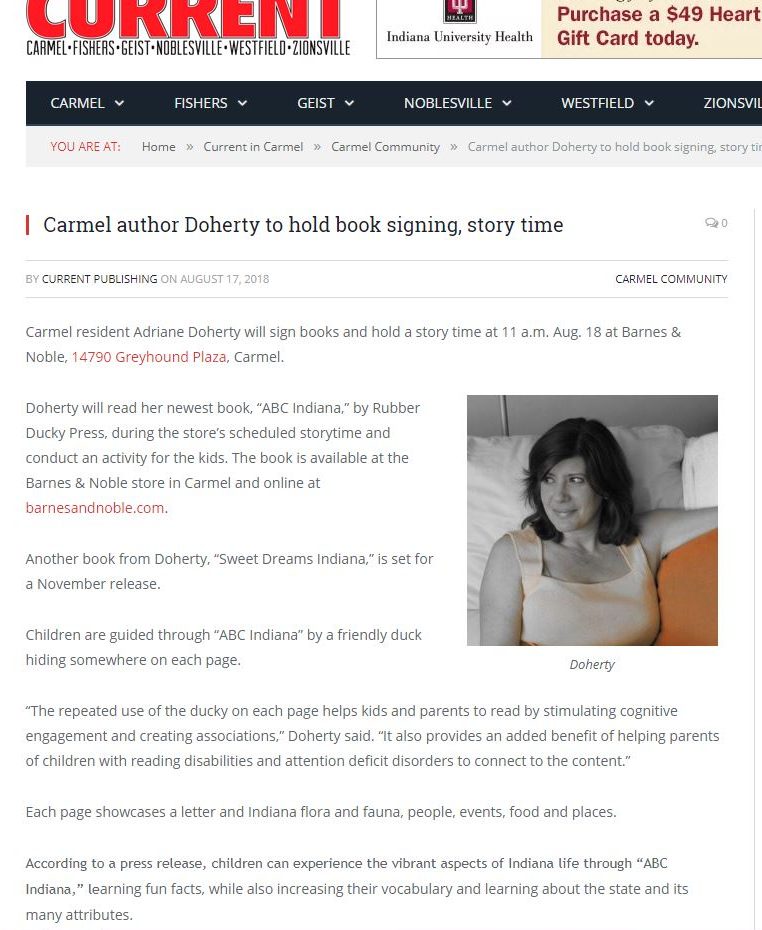